Replacement glide rods for Stressless Sofas can help you put the smooth, reclining motion back into
your beautiful Ekornes 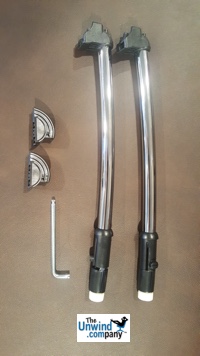 furniture. Choose either the "new" style glide rods (for sofas built after 2003) or the "old" style (for sofas manufactured between 2000 and 2003). The models vary slightly and are not interchangeable, so it's worth a few moments to check under your sofa to confirm the date it was manufactured. Of course we're here to assist as needed.

Take a look at this instructional video from Ekornes (on YouTube) that can assist you with the glide rod replacement:
Stressless Sofa Glide Rod Replacement Video

If you need assistance with the replacement, local furniture repair specialists are typically available in most areas. We are unable to recommend or endorse specific companies since we have no logical way to gauge their specific areas of expertise.

Get the latest updates on new products and upcoming sales